Deciding to incorporate sustainable practices can be daunting. Even though these practices save financially in the long run, it is hard to change our routines. Solar Energy has a scary connotation. When I brought up the idea to my family the first thoughts were large panels, construction and upfront costs. I love that Northbrook residents want to genuinely do good, but we are also pragmatic people. Solar panels on the roofs of our homes in a cloudy and snowy Chicago suburb is not a commitment most are comfortable with. Now in Illinois there is an alternative way to support and use solar energy without installing panels, through Community Solar.

ComEd, the electricity utility service, delivers energy to Illinois residents from coal and natural gas plants, sources of non-renewable energy. Relying on only non-renewable energy depletes natural resources at a rate in which they can not be replenished. Clearway provides ComEd an alternate energy source from solar farms, several thousand panels installed in an open field in Illinois. The Future Energy Jobs Act (FEJA) was passed in Illinois to increase renewable energy to 25 percent of ComEd’s and Ameren’s power supply by 2025. With the financial incentives provided in the FEJA, companies like ComEd are encouraged to build these solar farms, which in turn creates new local jobs in renewable energy.

Clearway and Trajectory Energy Partners work to execute this shift of renewable power generation. Clearway builds and operates the community solar farm sites, while Trajectory Energy Partners helps residents sign up for solar energy. The power from solar farms is sent into the electric grid and used by residents all over Illinois. Anyone within the ComEd or Ameren service areas is eligible to join a community solar project, and support the renewable energy movement in Illinois.

With Community Solar, you only pay Clearway for the energy supplied from its solar farm. Therefore your original ComEd bill is not increased but the costs are redirected to maintaining solar farms and increasing the amount of renewable energy in the supply grids. During months of limited sun and less solar energy, ComEd will then use energy from their non-renewable sources. However, signing up with community solar will increase the amount of overall solar energy used in the supply grid.

With local government support for solar energy jobs, the cost of switching is less than your current electricity bill. While you won’t save hundreds, you will save $10-20 per electricity bill. Many might wonder, how is solar power provided for less than conventional power? Below is an example bill outlining the costs. First a customer receives a ComEd bill, consisting of the three parts: Supply, Delivery, and Fees. The combined amount in the ComEd bill is $200.  After the community solar farm is used, its energy is added to the ComEd energy pool. At this point, there will be two bills, with a slightly lower combined cost. 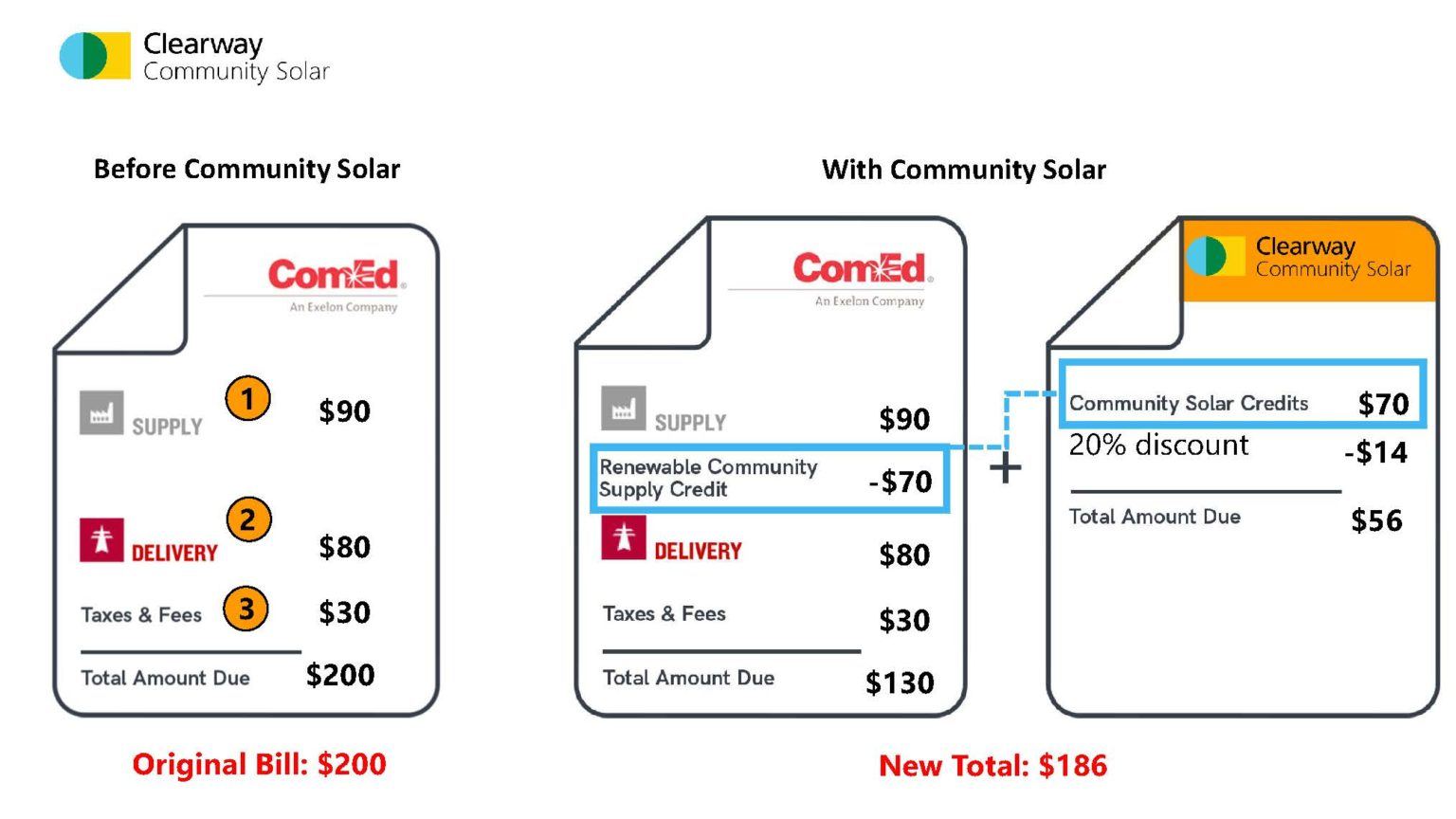 With Community Solar, an amount is reduced from the ComEd ‘Supply’ section, and added to Clearway. That amount is the electricity supplied from solar energy. That $70 for this month is taken away from the ComEd bill and paid through the Clearway bill. The costs do not go up, but are redirected. Now that same $70 is going towards solar energy farms, and supporting the jobs and usage of solar energy. Clearway offers a 20% discount to Illinois residents in the ComEd service area, which reduces the original $70 to become $56. Not only are you supporting solar energy at no cost, you are saving money. The ComEd delivery fees are the same, but now the source of energy has changed.

With lower costs, Northbrook Residents are actively combating climate change. The Clearway Community Solar bill process is the same as ComEd, only with two bills at a lower combined cost. While this part is something new, the effects are worth it. In a small change of your routine, you are shaping how we define our energy sources. Today, less than 10% of the energy delivered by ComEd comes from renewable sources. Our current energy supply is a direct negative impact on the environment. Only when we commit to incorporating these sustainable practices in our lives will we see change reflected in how our world looks. If we want renewable energy used in the United States, then we need to pioneer these changes. I love Northbrook for being filled with pragmatic genuine people, but above all else we are smart. When presented with all these facts and plans, I know our community can rally around this initiative to create a positive influence and lead Illinois in the direction of more renewable energy.
Feel free to contact GoGreenNorthbrook to be directed to Clearway with any more questions or sign up here.

View all posts by sarahhsanford

Processing…
Success! You're on the list.
Whoops! There was an error and we couldn't process your subscription. Please reload the page and try again.
%d bloggers like this: